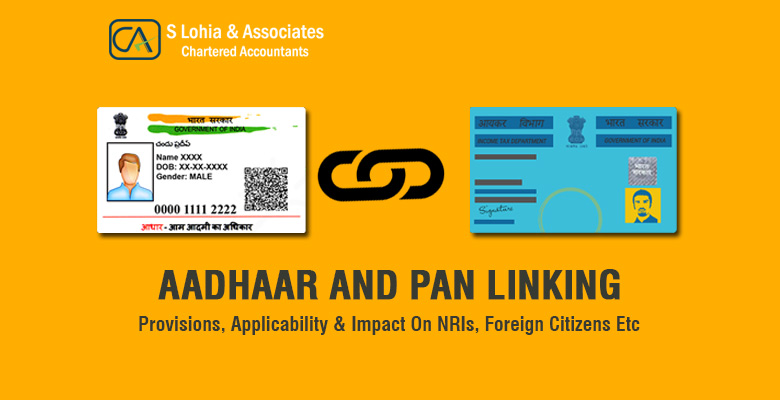 This new provisions has made it mandatory for individuals to link their Aadhaar with Permanent Account Number (PAN).

Validity of section 139AA was questioned in the court. On the same, in September 2018, 5 Judged bench of Supreme Court pronounced the judgement and upheld the legal & constitutional validity of Section 139AA. Court said that rules, in relation to Aadhaar linking with PAN and quoting the same in Income Tax documents, are valid.

Budget 2019 – Easing of Norms For NRIs for Obtaining Aadhaar

This notification provides relief to various categories of people particularly Non-residents (ie NRIs) and Foreign Citizens (ie Expatriates, PIOs, OCIs etc) as there was a practically & logical challenge for them to apply Aadhaar number. Now, such individuals would be able to file their tax return/ obtain PAN in India without having Aadhaar.

Due Date of Linking of Aadhaar and PAN

How to Link Aadhaar and PAN

Linking of Aadhaar with PAN can be done either through income tax website ((www.incometaxindiaefiling.gov.in) or via SMS as per the process as under:

What If PAN is not Linked with Aadhaar

In a recent judgement (BANDISH SAURABH SOPARKAR Vs UNION OF INDIA), Gujarat High Court decided that:

Disclaimer: Though the information provided here is prepared by qualified and well experienced professionals, however, we hereby advise the readers to seek a professional advise (as per the facts of matter and changes in laws) before acting on it’s information.

Q: Is it mandatory for NRIs to link PAN with Aadhaar? What is the Aadhaar-PAN linking requirement in relation to NRIs?

NRIs are Indian citizens (holding Indian passports) who are working & living abroad. There are two levels of laws, which applies on Non-Resident Indians (NRIs), ie as under:

Q: Whether foreign citizens (PIO, Expatriate) are required to obtain Aadhaar and link it with PAN? Is it mandatory for Foreign Citizens to link Aadhaar with PAN?

No, if they donot have Aadhaar, they can file ITR or apply PAN without Aadhaar number. For more detailed answer please refer above FAQ.

Q: Is it necessary to link PAN with Aadhaar even if there is not taxable income?

Yes. As per section 139AA, every person have to intimate (ie linking) to the Income Tax Authority by the due date. Else, PAN will be inoperative.

Q: If once Aadhaar is linked with PAN, can it be delinked later on?

Q: Whether a foreign citizen can apply for Aadhaar?

Q: How can the Aadhaar be linked with PAN?

Aadhaar can be linked with PAN by three ways i.e. By SMS (to 56161 or 567678), by login into Income Tax Website (www.www.incometaxindiaefiling.gov.in), and by without login into income tax website. Detailed process is mentioned above in this article.

Q: What is the process of Aadhaar Enrollment for NRIs?

As per UIDAI guidelines, NRIs need to following process for Aadhaar enrollment

Usefulness Of Above Information – Aadhaar-PAN linking

Above information can be helpful to all individuals, companies employing expatriates, NRIs living & working abroad, Foreign citizens residing in India and Abroad etc. Some of the usefulness of above is towards:

ITR Filing Process in India for Non-Residents and Residents

How to File ITR for Earlier Years and Claim Refund